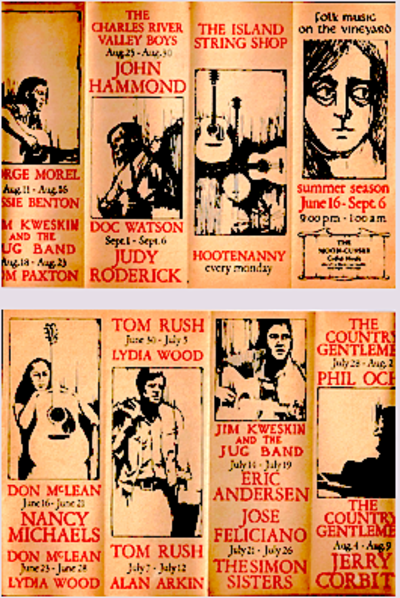 The Vietnam War was in full swing. A Kennedy was in the White House. The Beatles had yet to arrive in the US. Woodstock was five years away but folk music was still folk music and as popular as rock, even more so than the blues and most forms of jazz. In Boston, folk music was the rage.

That spring of 1963, something special happened on the Vineyard which had an impact on today’s music and many of today’s musicians. Ginny Blackmar, a summer resident on the Vineyard and a student at Colby Junior College in Wellesley, told me the Island would be a great place for a coffee house with folk music. At that time, I was the manager of Boston’s Unicorn Coffee House, where the co-eds from Colby spent their weekends. The Unicorn was the largest of the three folk music coffee houses in the Boston area–the Club 47 in Cambridge was perhaps more well known, but was smaller, offered more traditional performers and was slightly more “authentic.” The Cafe Yana in Kenmore Square was the smallest and featured local singers. The Unicorn, on Boylston Street, brought in people like Theo Bickel, Ian and Sylvia, the Lime-lighters, Jose Feliciano.

The idea of a summer coffee house on Martha’s Vineyard gathered momentum as I talked up the idea at the club. Two of the regulars, Fritz Dvoák and Dick Randelet, electronic engineers from Route 128, pooled their resources and backed me with $2,000 cash. Dick and I visited the Island in April, where we found a vacant grocery store on Circuit Avenue in Oak Bluffs. The space was huge, it would seat (legally) 125. That would be enough. The price was right.

With a signed lease, an application for a common victuals licenses and other necessary permits filed with the Oak Bluffs’ selectmen, the work began on assembling the rest of the elements. Over the next two months, working part time as the Ring Master on the Bozo television show, hosting a series of radio shows and managing the Unicorn–I pull together the elements that would turned that empty space (now, an up-scale clothing store) into the Moon ‘Cusser Coffee House…